Hover / touch the image to zoom in

In April 2016, we reached out to the Ryedale Family History Group to help us with some research. We were interested to find out more about Fred Witty whose Indenture hangs in the exhibition.

This Indenture (an early form of employment contract) which is dated 1888 was for Fred Witty who was apprenticed to the baker and confectioner, Thomas Taylor of Malton for a period of four years. Fred would be paid the sum of eight shillings a year which is equivalent to about £24 today.

Fred Witty was baptized on 2nd July 1871 at St Leonard’s Church, Malton; the family lived in Castlegate, according to the Census returns. Following his apprenticeship he married May Ellen Bogue of Brawby on 3rd July 1895 at the Parish Church in Salton. They lived in Vine Street before moving to Church Street, Norton where he set up a baker and confectioner’s business. Fred and Mary Ellen had four children. Mary Ellen died in 1928 and Fred in 1936 and they are buried in Norton Cemetery where their headstone can be seen.

There are many families in the area with the surname ‘Witty’ – if you have any information about Fred and Mary Ellen or the Witty family in general please contact Malton Museum by speaking to the volunteer on duty.

Ryedale Family History Group is a locally based organisation, which for over a decade has been specialising in the Ryedale area with a range of books and CDs/downloads of Parish Registers, Memorial Inscriptions, War Memorials, histories and much more; which are invaluable to those with an interest in family or local history. Our well-equipped Research Room is based at Hovingham Village Hall, and is open on Thursdays 10am to 3pm; we have a team of people ready help you find your ancestors.

We can help with research anywhere in the country or abroad. Check out our website at www.ryedalefamilyhistory.org or phone us on 01653 628132.

This belonged to Lucius Servenius Super, almost the only Roman living in Malton whose name we know. Lucius may have been a soldier from the fort as soldiers carrying similar pans are shown on Trajan’s Column in Rome, and they probably used them for cooking as well as eating from them. The metal worker who made it, Alpicus, also engraved his name into the copper-alloy. His pride in his work is certainly justified – it still looks good enough to use. 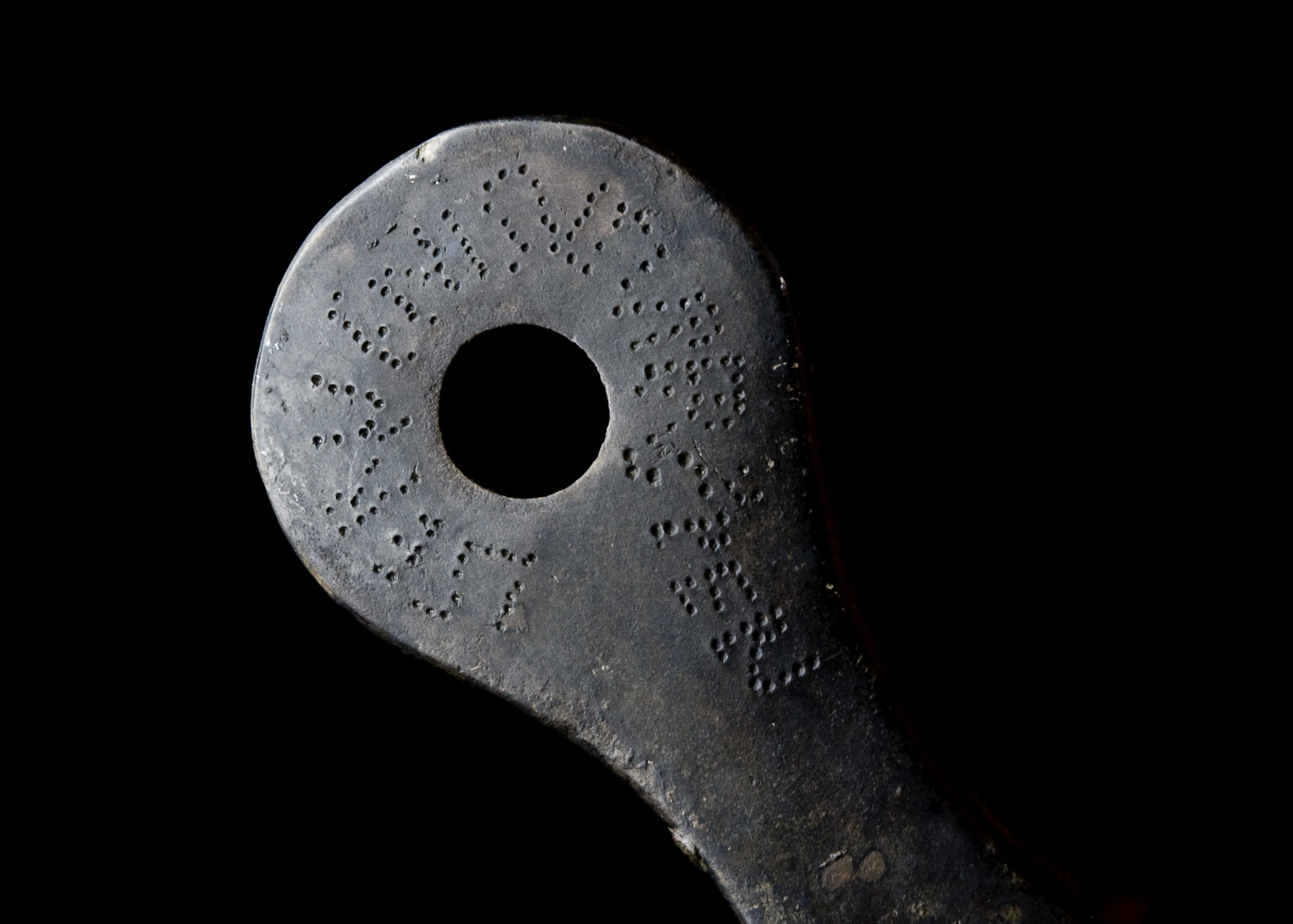 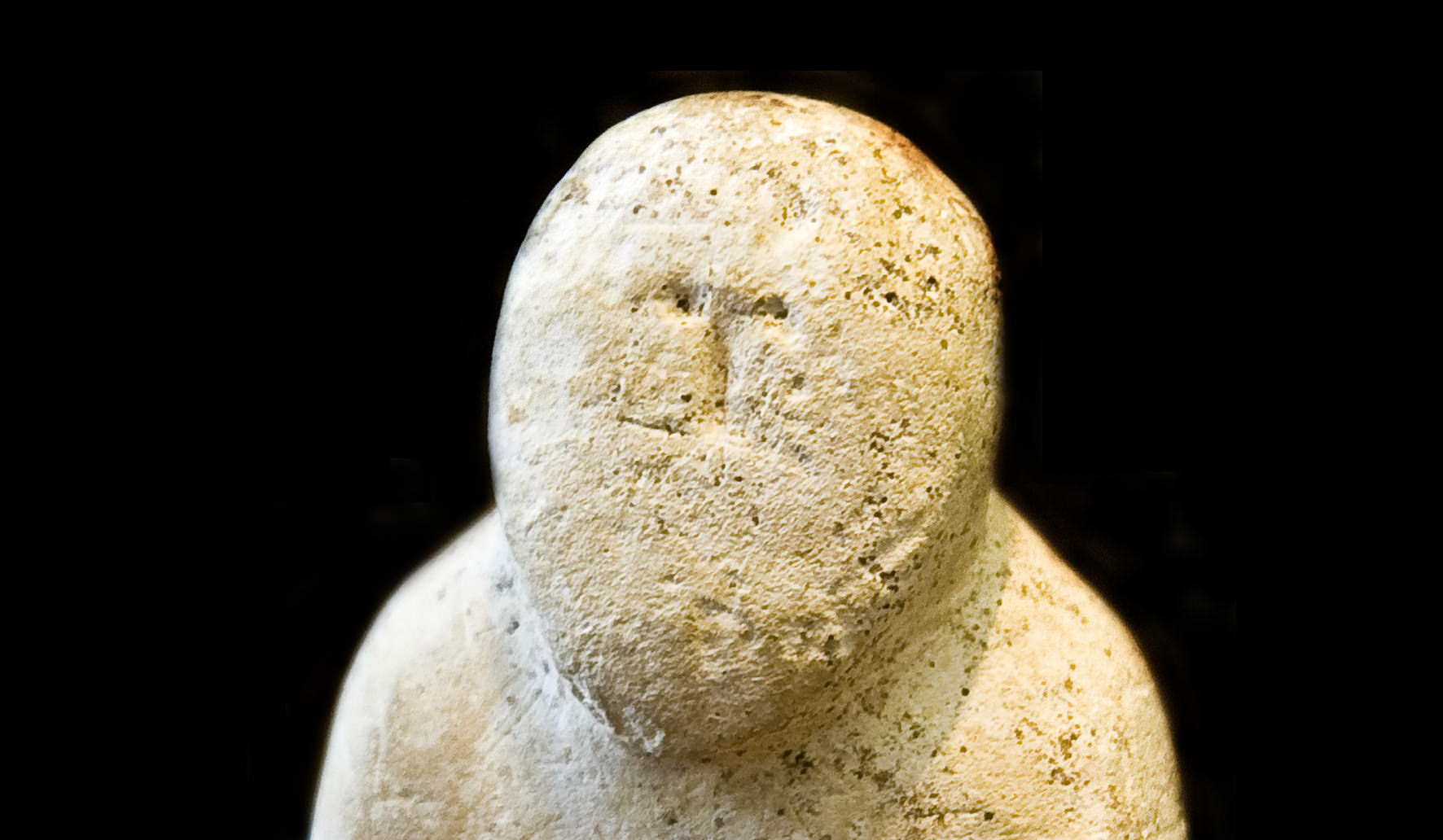 Our chalk figures, found in Malton, were made by the Iron Age people living in the area just before the Roman conquest. We believe they were only made in Yorkshire where over 50 have been found, all different but equally fascinating. If you look closely you can see the face, a sword and belt etched into the stone suggesting they represent a warrior, but who owned them and why remains something of a mystery; found near a spring, were they an offering to a god, did they stand in a household shrine, were they children’s toys, or something quite different? They are often found headless! 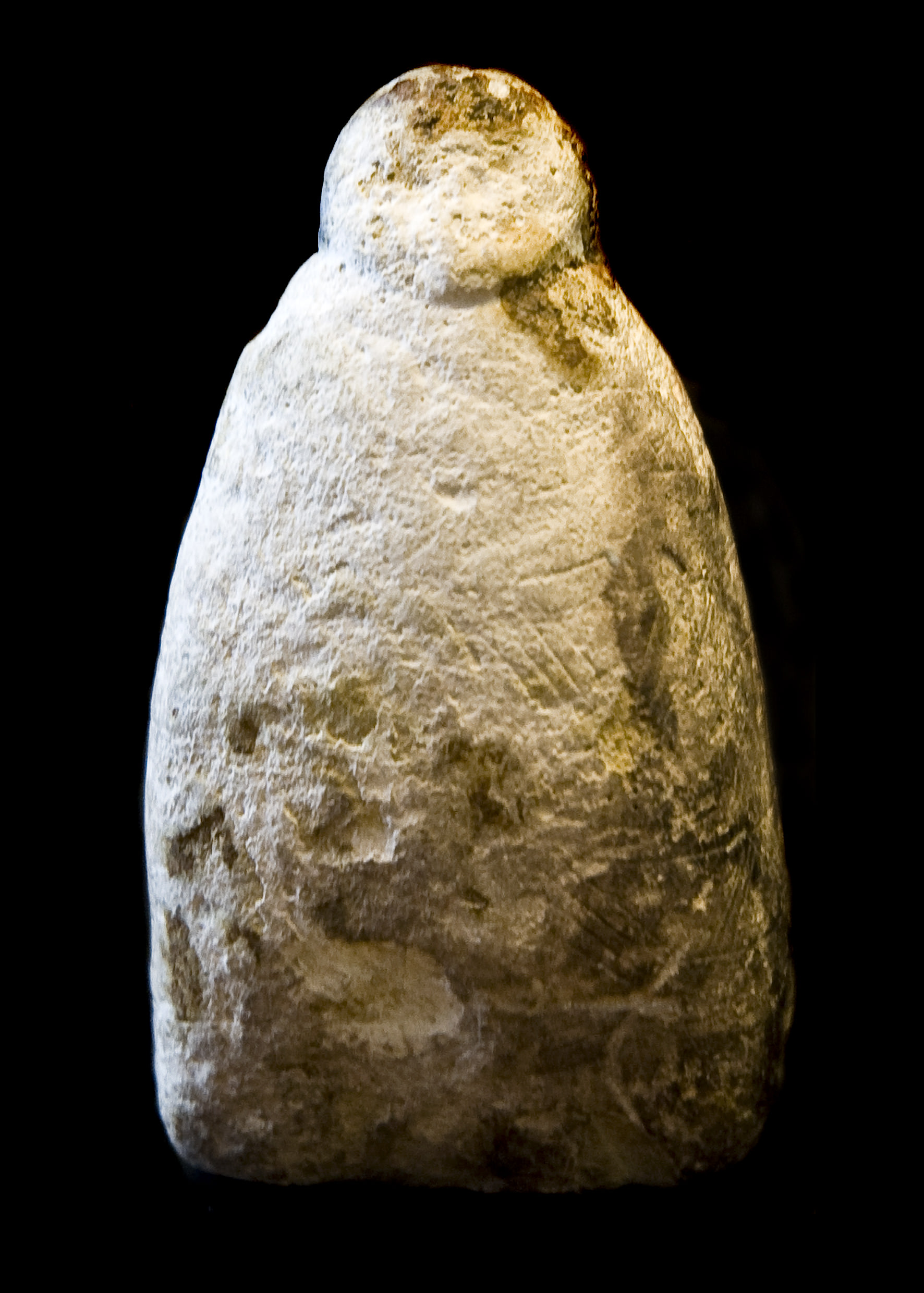 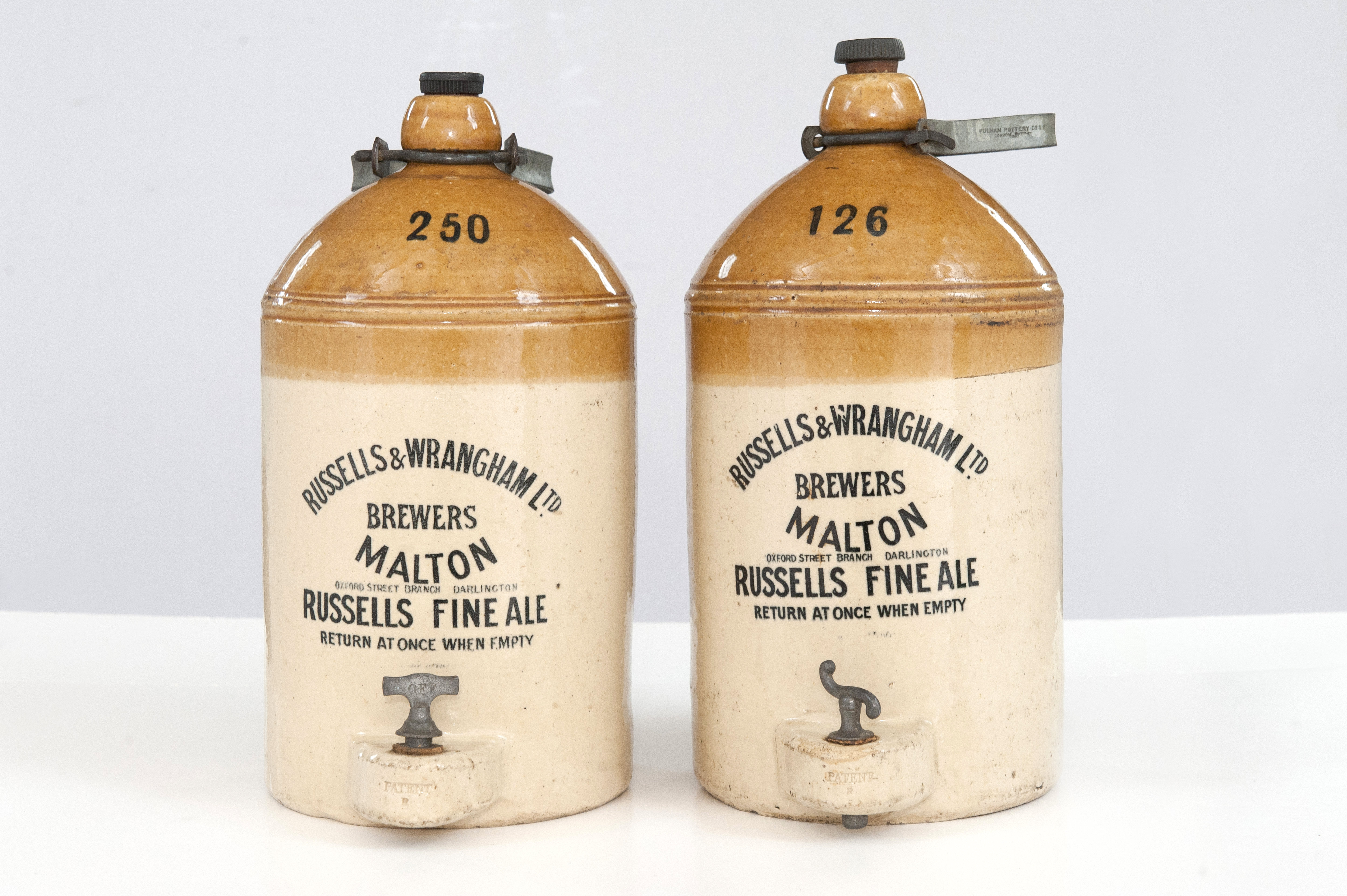 Eating and drinking is essential as well as sociable and this jar represent the museum’s growing collection of objects associated with brewing, an important trade in Malton and Norton throughout history. The inscription shows that the jar, from a local brewery Russell and Wrangham, was meant to be returned for refilling but never was, and instead passed through generations of a family who recently donated it to the museum.

In the late 1920’s Dr John Kirk, a doctor from Pickering, was excavating the Roman Fort in Malton’s Orchard Fields. He and his colleagues used tins and boxes from their homes in which to pack the finds. The museum has now repackaged the objects in bags and boxes meeting modern museum standards, but the old packaging gives an interesting glimpse into what the excavators were buying, just as the objects they founding he fort illustrates life in Roman Malton. 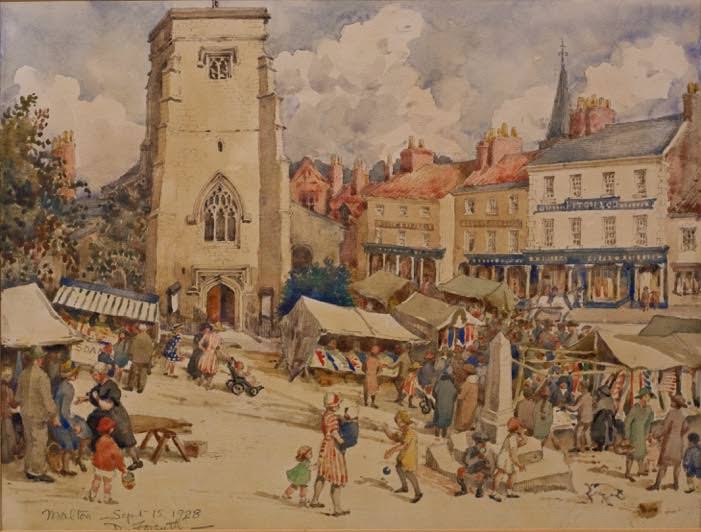 A Selection of Objects from a Local Artist, Dorothea Forsyth

Dorothea Forsyth (1882 – 1945) lived with her GP husband, in ‘Forsyth House’ which still stands in the heart of the market square. Dorothea was a skilled artist and needlewoman and the museum was delighted by her descendants’ gift of a fine collection of her needlework, including these beautiful dolls, and wonderful sketches and watercolours. Dorothea’s work often depicted local scenes of the market town which makes us wonder whether the dolls were based on local personalities. They are individual and very different and appear to resemble different moods. 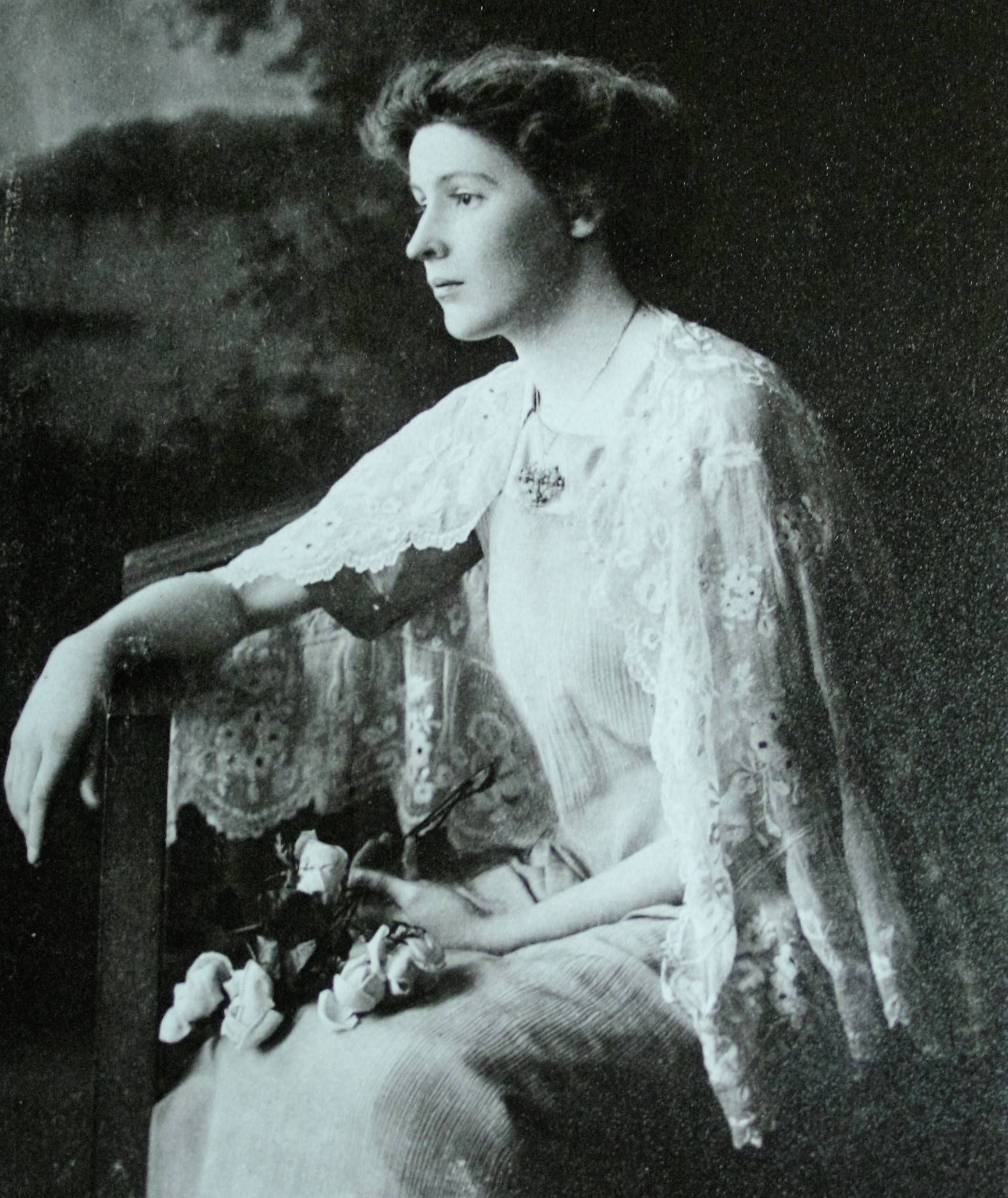 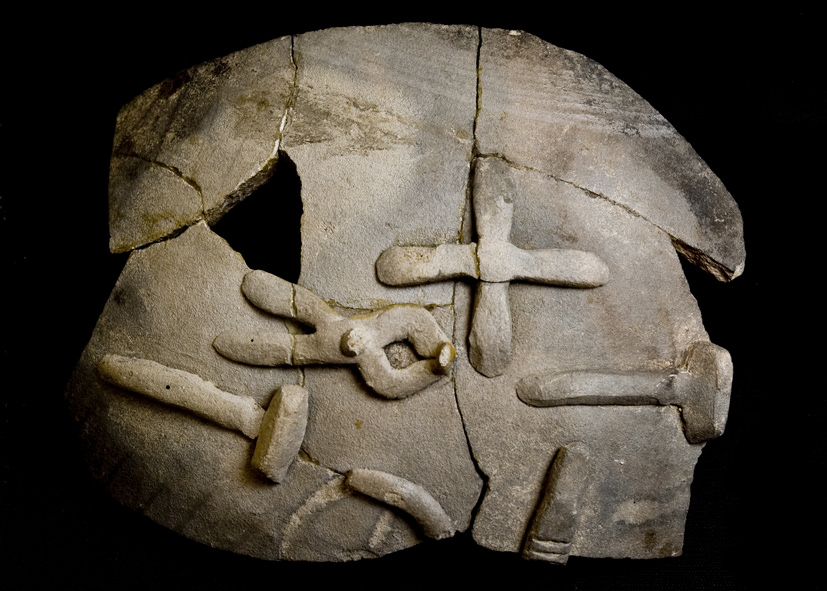 Part of a Pot Made in Norton and Showing Blacksmiths’ Tools

An important pottery industry developed in the civilian settlement around the Roman fort and across the river into modern Norton. They made these special pots with applied decoration and pots with faces on them as well as plain ones. The tools, which may honour a local Smith God, are very similar to those of a modern blacksmith – once a good tool is perfected there is no need for change. 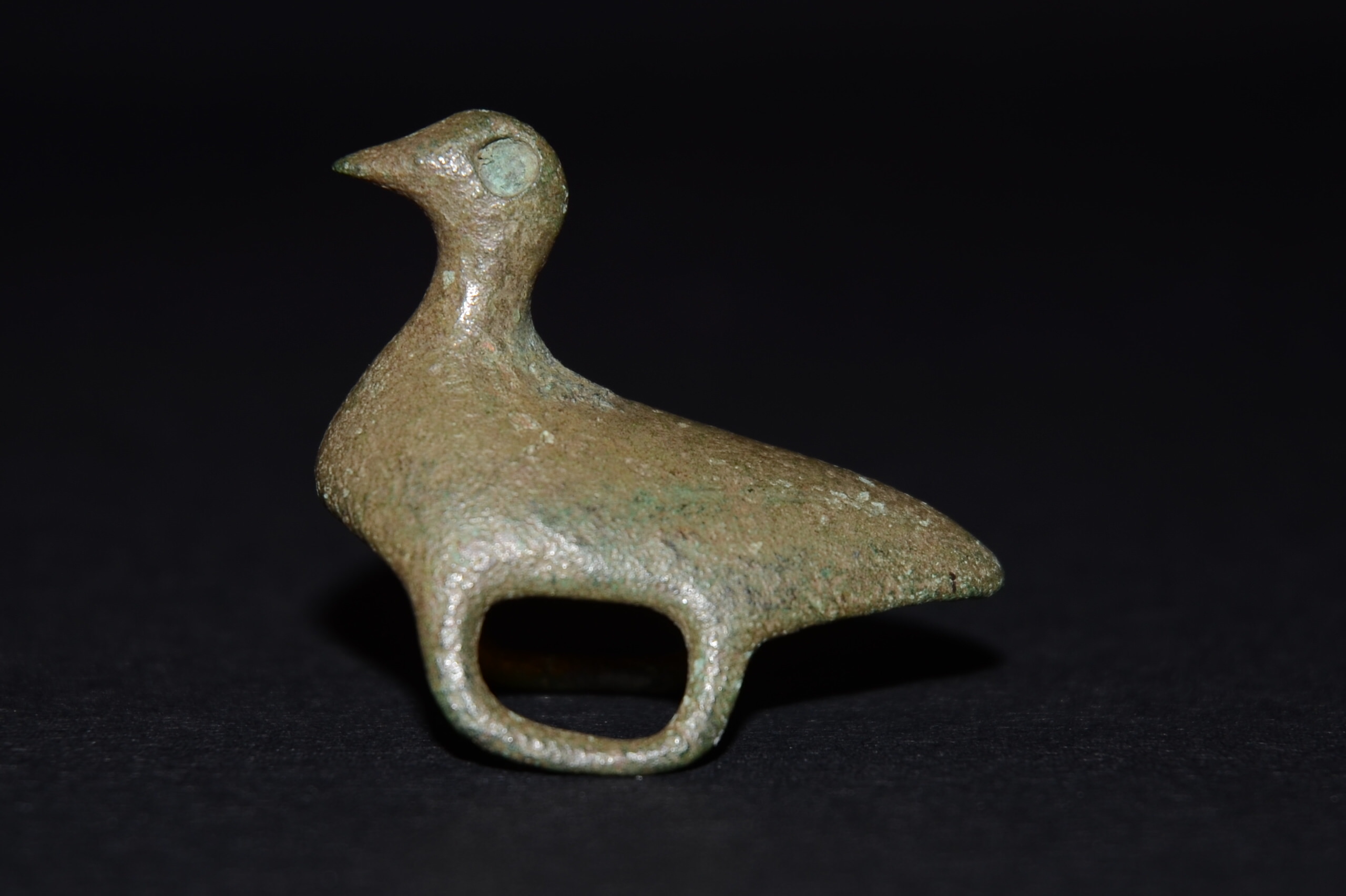 This small weight is shaped to slide along the balance bar of a set of scales. 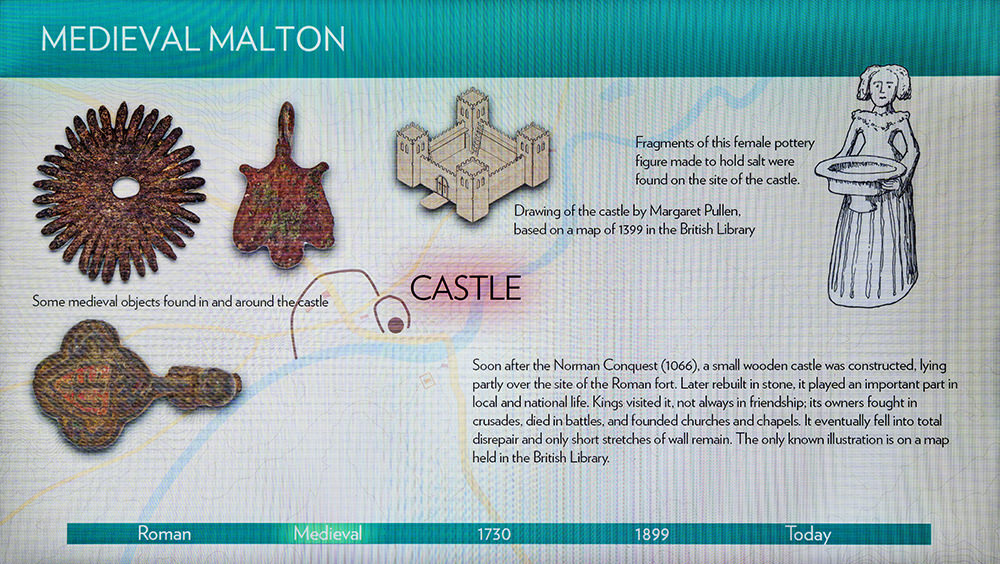 Explore how Malton and Norton have developed through with our interactive touchscreen. 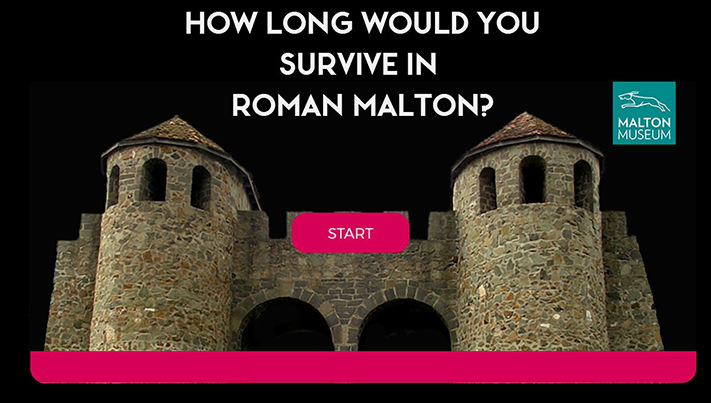 How long would you survive in Roman Malton?

‘How long would you survive in Roman Malton?’
Working with students from University of York to create a digital game

In May 2017, we worked with first year archaeology undergraduate students from the University of York. Tasked with the idea of creating a digital output to be used online, and potentially in the museum, the students embraced the project and the game ‘How long would you survive in Roman Malton?’ was born.

The brief given to the students was to create something to appeal to a younger audience, using Fido, our museum dog icon as the guiding figure. The students spent time with the museum volunteers, looking at objects in the store and seeing how and what the museum currently did for families and in schools. The students then pitched their ideas to the volunteers and a plan was agreed. The students would create a series of scenarios and ask the ‘player’ to make certain choices. The ultimate goal was to see if you could survive until the age of 52 years in Roman Malton.

The game was then tested with volunteers, a school group and visitors to the museum, before the final version, which you see today, was completed.

The students blogged about their experience which can be seen at https://derventiobrigantum.wordpress.com

The museum was thrilled with the outcome. The game will be installed in the museum in the summer of 2017. We would like to thank the students and supervisors listed below;